How will you know when it's time to take off your rabbits wool? That depends on the breed.

Satin and French angora shed around every 4 months. It varies per individual rabbit. You will notice the wool looks a bit dull and will come out very easily if you pull on it. It starts to let go over the back and shoulders first. The wool 'lets go' over a period of days, and sometimes breeders pluck out the prime body wool and clip the rest. Be cautious about accidentally clipping off the tips of the new growth coming in underneath. In the case of satin angora, clipping off the tips by mistake will negatively affect the color and vibrancy of the new coat.

English, Giant and German angoras typically do not often shed, although some lines of english do. Their hair must be cared for as it gets longer and longer, then cut off with scissors when you or your bunny are ready. I have known people to say they pluck their giants and english, but I tried it and he bit me. I vote for scissors.

Following is a picture tutorial of how to cut down a giant angora. 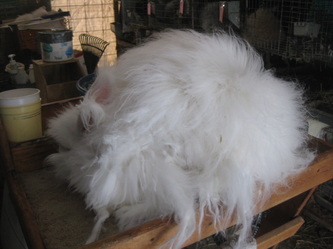 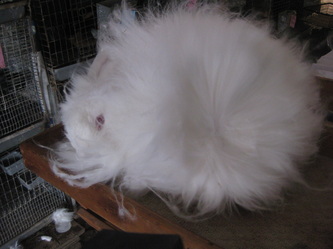 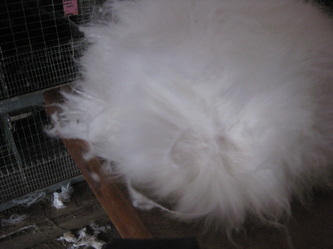 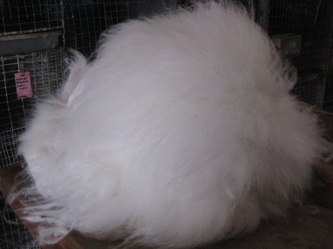 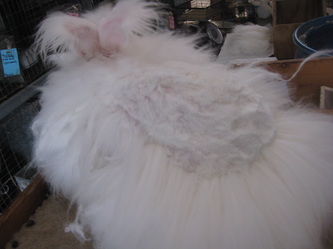 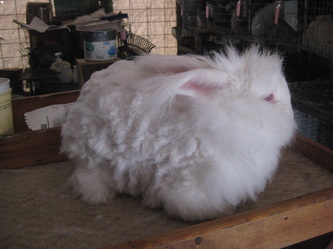 The first picture shows an angora who clearly needs sheared. He has been pulling out his own hair, signifying he is done with it for some reason.
The first step is blowing out the coat. You must groom your bunny before removing his wool.
Pictures two, three and four show the blow-groom. See the webbing working out in picture three.

Picture five shows him after removing the back wool. You can see the side, prime wool well groomed and ready for cutting.
When I cut the wool off my rabbits, I use a pair of sharp, short scissors. Rabbit fur is fluffy and very fine. Your scissors MUST be sharp. I start on the spine and grab one hunk of wool at a time. I cut close to the skin, parallel to the body. DO NOT PULL the fur upwards. Hold it taut, but do not pull. It is imperative you do not accidentally cut the skin. It is very easy to do this by mistake.

Each hunk of wool I lay aside, then grab and cut another. Be careful not to cut over where you have been before. This avoids tiny pieces, or 'second cuts' that will later have to be picked out by hand. It's a pain you don't want.
Picture six, he is finished.

*Important note*
When you get to the areas where the skin folds; legs, armpits, belly, crotch, shoulders, rear, etc.. be extra diligent about accidentally cutting the skin. I gently pinch the skin, then slide my fingers back in the wool so I know for sure where the skin ends and the wool begins. I have cut bunnies on accident. It hurts, it sucks and many times, you don't know until its too late.
In the event you do mistakenly cut your bunny, after you are finished with the cutting, dab some triple antibiotic ointment on the exposed meat, then leave it alone. Usually it heals up pretty good.

It is important to cut down the legs and the top and sides and sometimes even the bottoms of the feet. Don't accidentally cut off a toe. Its easier than you think.
When cutting the rear end, be very aware of the location of the tail. It's longer than you think, and again, easy to cut off if your attention is elsewhere.

*CUTTING DOWN A BUNNY IS A BAD IDEA WITH CHILDREN OR DOGS RUNNING UNDERFOOT*
Do it when no one else is around. If your bunny is suddenly startled and jumps, he could injure himself and you.

When you are done, blow off his body to get the little pieces away. You don't want him to ingest them if at all possible. I make it a practice, unless they are badly tangled to not cut the neck muff or the face trimmings. They take longer to grow back and only grow so long.

Don't worry too much about your trim job being even. After I get the bulk of the wool off, I usually leave the bunny alone for a few days and then even up the length next time I do my scheduled grooming. Many times, I also do the belly, legs and crotch on a different day. Sometimes bunnies can only tolerate so much. 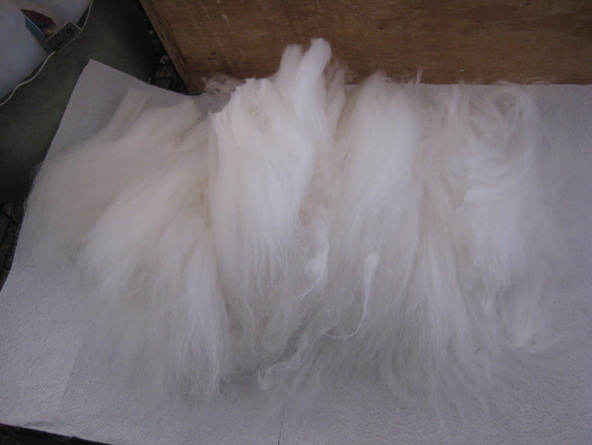 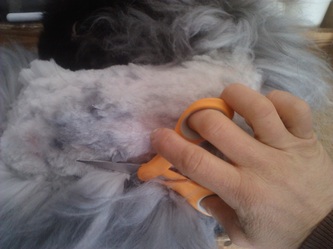 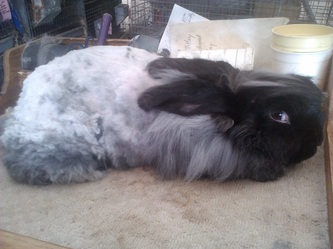