Are you Ready to be a Bunny Grandma? 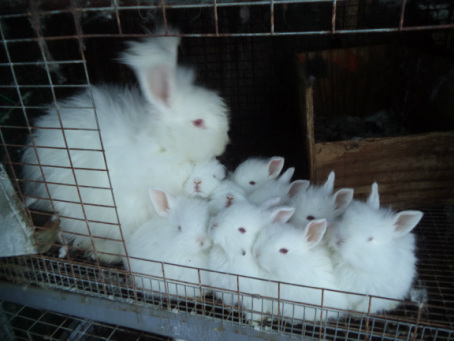 Breeding your angora rabbits (or any rabbit for that matter) takes a bit of preparation and planning before the breeding ever occurs.

The big question is, 'Do you have enough space and time'? Your doe could give birth to as little as two or three or as many as 15! By the time those babies are 4 or 5 months old, each one will need its own cage, or a new home. Are you prepared to deal with that? Also, each of these new lives will need groomed starting as young as 2 months. Do you have time for that? If you do, great! If you don't, don't breed.
Your rabbits must be at least 6 months old before they can be bred. A little older is better. Some can show signs of being ready to breed younger than 6 months, but it isn't a good idea.Does are fertile the majority of the time. They do not have 'heats' like other animals. Bucks will go anytime you put a female in front of them, unless it is very hot. Many angora breeders only breed in the winter, since angoras suffer in the heat and the summer is show season.

Take the doe to the bucks cage. NEVER the other way around. Does are very protective of their space and could hurt a buck very badly for being there. Put the doe into the bucks cage and watch the whole time. If you do not watch, you will never know if he did his job. He should mount and when he makes contact, he will stiffen, sometimes make funny noises and fall off of her. The standard practice is to remove the doe and return her to the buck 30 minutes later for another time. Does ovulate when they are bred.

Mark your calendar. Gestation is around 30 days. Your does cage should be a minimum of 24X30 for English angora and 30X36 for the other four angoras.

Preparing Your Doe for the Big Day

When your doe is three weeks pregnant, you need to prepare her for giving birth. All that hair can cause a serious problem if not handled properly. 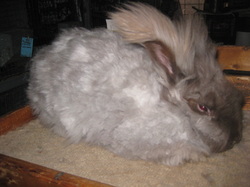 This chocolate doe was trimmed in preparation for birth all over her body. Sometimes, long body hair can cause problems in the nest box. I cut this does hair down to one inch long all over. This gave her enough hair to keep her warm since it is winter, but left it short enough to avoid strangling the babies when they were born. Trimming the whole body isn't always necessary. This doe had 7 inch wool and I decided she would be better off without it.

If you do not trim the belly, the babies will not be able to find the nipples and they will die . I take a pair of sharp scissors and VERY VERY carefully, cut the belly very short, like 1/4 inch. I lay the bunny on my lap, on her back to do this.

After a few minutes of petting, she will be calm and still and I can proceed.

When you trim the belly be EXTREMELY careful not to cut off her nipples!

After I trim the belly, I blow into her fur to find her nipples. Then I trim a bit shorter around each nipple. I want them to stick out further than her fur so the babies can find them. I also cut the hair shorter in her crotch area. Less of a mess for her that way. This doe only had 1 1/2 inch fur, so I left her body wool alone. 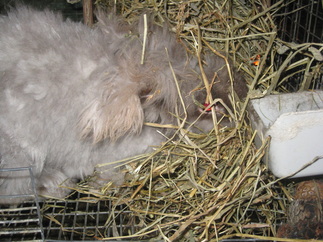 On day 27, give your doe a nest box. I prefer wooden but some people use metal ones. Your box should be only a tad bit bigger than the size of your does body. If it is too big, she will use it as a litter box while her babies are in there. If it is too small, she will have her babies on the wire.

Some boxes have wire bottoms and some have solid bottoms. If your box has a wire bottom, put a piece of paper or cardboard under the box to block any drafts from underneath. Some boxes also have tops and some don't. For angoras, I prefer the boxes that don't.

Fill your does box with bedding material. Different people use different things. The usual things are hay, straw or shavings. If you use shavings, use aspen. Cedar should be avoided because of the oils, and pine has too strong of a smell. I use a mix of aspen shavings and hay. Some people use shredded paper as well.  Whatever you choose, your doe will rearrange it to her satisfaction. Make sure you give her plenty!

On the day that she gives birth, in an ideal world, she will pull hair from her own body and make a nest in the bedding, in the box. Keep a close eye on her, but leave her alone. Unfortunately, it's not always an ideal world.
If something goes wrong, you will have to step in.

One very important thing to know about angoras, is their wool felts when damp and agitated. Babies urinate in the nest box, which makes the fur sometimes damp. Then they squirm and move around. Mom jumps in and out as well. All this activity causes the fur to felt into one mass. You must look at your babies everyday. Felted wool tends to wrap, and can and will wrap itself around necks, feet and bellies. If you find this (and I have many times), simply cut the string with a pair of pointed sharp scissors. Be VERY careful not to cut the baby. It is easier to do than you think. I've been raising rabbits for 20 years and I still occasionally mess up and nick a rabbit. It's never fun.

To avoid nest box wrapping, every few days I cut up some of the bedding with scissors into smaller pieces. It only takes a minute or two.

My doe had her babies on the wire.
If they are moving and warm, simply put them in the nest.
If they are moving but cold, you MUST get them warm. Put them against your skin. Put them on a heating pad set at 100. Put them in with another litter if you have one. No more than two cold kits per other litter. In extreme cases, I've known people to immerse them in warm water, except their face. Sometimes it works, sometimes not. I have in a pinch, warmed up a dry cloth in the microwave and wrapped them in that. I also once used a chicken egg incubator to save cold babies. It worked.

My doe had her babies, but didn't build a nest.
YOU build it! Make a deep hollow in the bedding near the back of the box, about an inch off the edge. Hold down your doe and pull tufts of fur out of her hips, and butt area. FIll the hole you made. Put the babies in it, then pull some more hair. Cover them. Many times, a first time doe will pull hair on the second day. Sometimes it takes a day for their brains to kick in the first time around.

My doe had her babies, but she is eating them.
Something scared your doe. When a doe eats her babies, she is trying to protect them. In the wild, if she is threatened by a predator, she will eat her litter so they won't be found. You need to figure out what frightened her so it doesn't happen next time. It could be anything so have an open mind.

My doe isn't nursing her babies.
She probably is. Does only nurse once or twice a day. Check their bellies. If they are round and fat, they are fine.

All the babies are dead. Now what?
This is sad and unfortunate, but it does happen. If you find your litter is dead, do two things. First, figure out why so it doesn't happen next time. Sometimes it can be as simple as first timer stupidity. They are only animals after all.
Second, wait one day and rebreed your doe. Begin your countdown to the big day again. 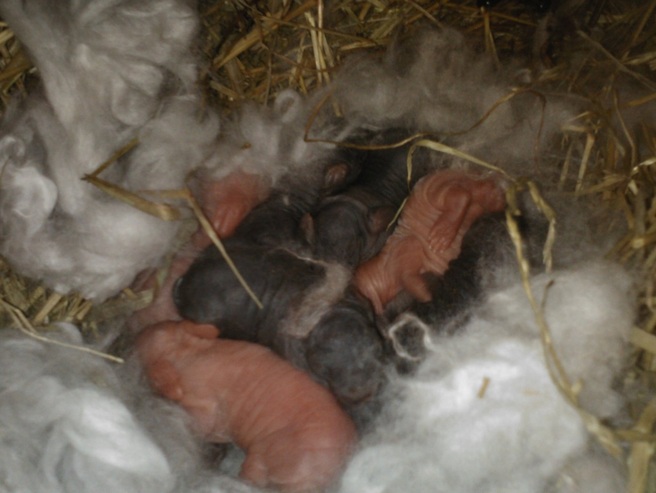 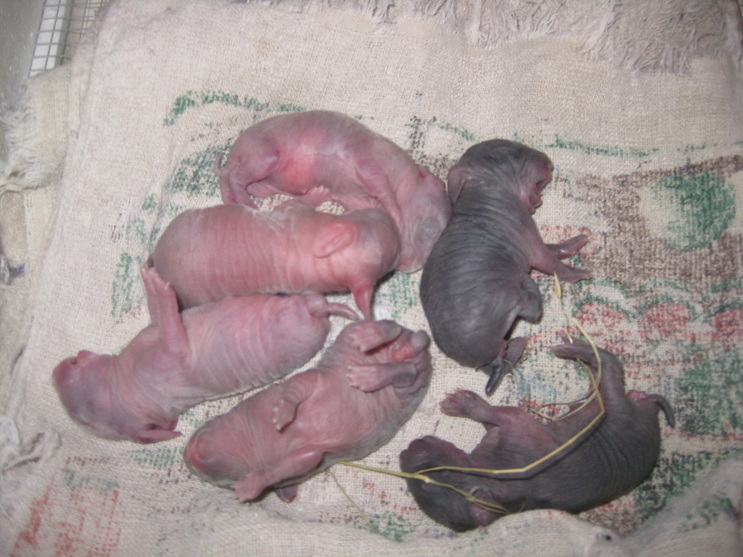